When we arrived in Beatty for our 7:00 AM start, we realized that some modification of the first days activities would probably become necessary due to the snow from the previous days storm. One of our goals was to find a concrete structure that Jeremy spotted on a trail ride just over a week earlier. We were unable to get there due to the fact that the vague trail we were following completely disappeared in the snow before we arrived in the vicinity of the monolith. Our 8 rig expedition team consisted of Sandi & I, Jim, Sherrie & Kramer, Don & Linda, Brian & Jeremy, Vic & Yvonne, Selway & Pam and Ed & Mary Lou. 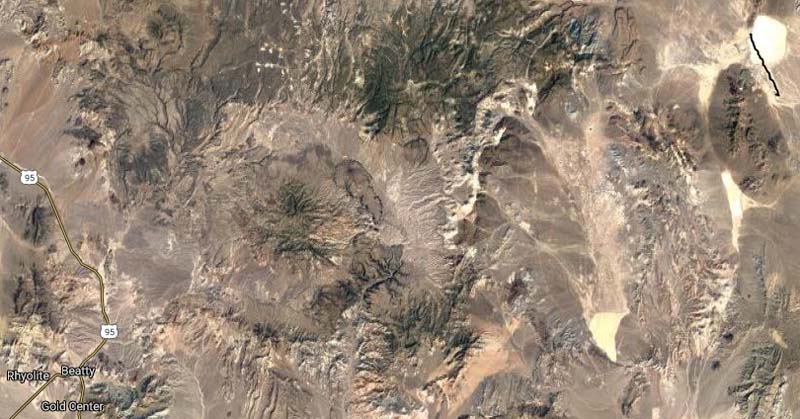 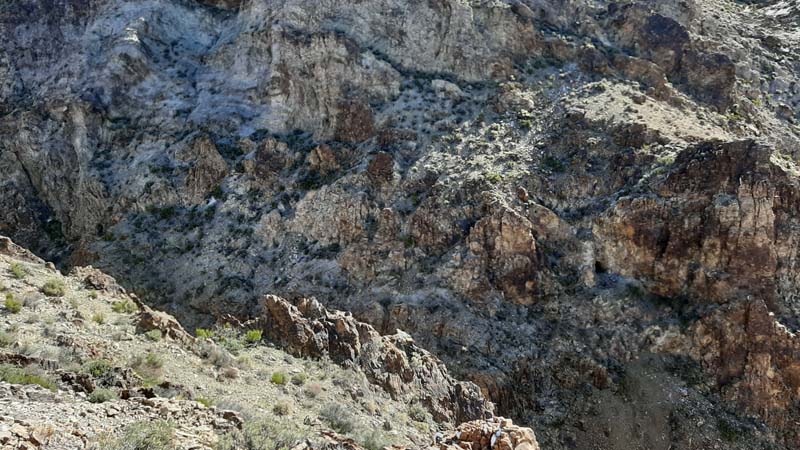 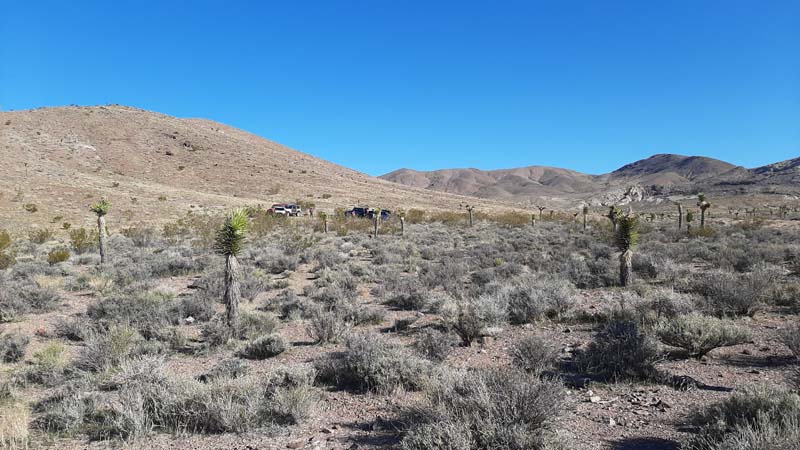 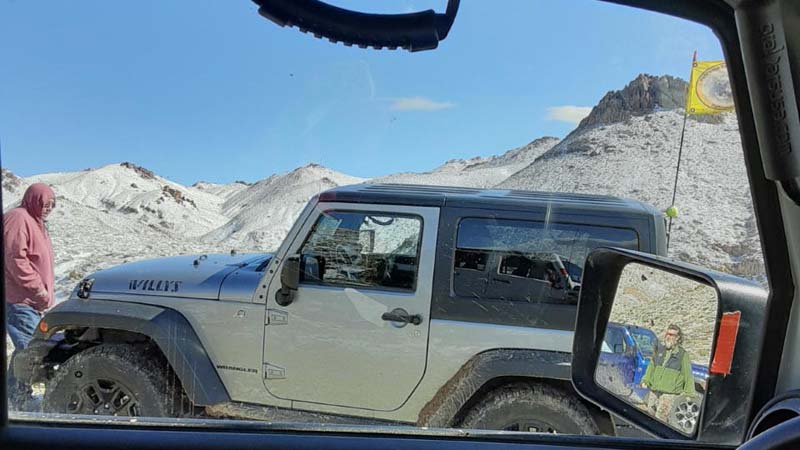 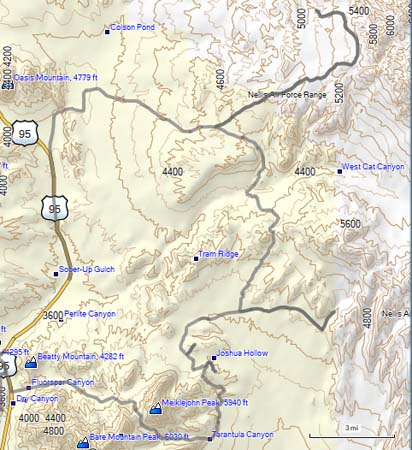 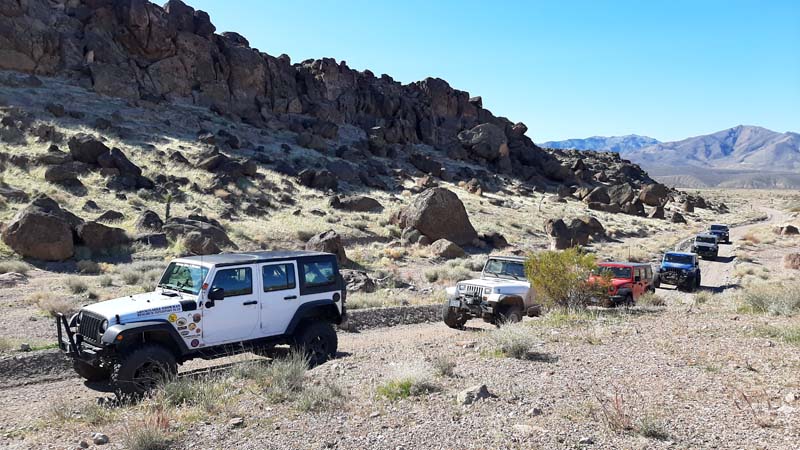 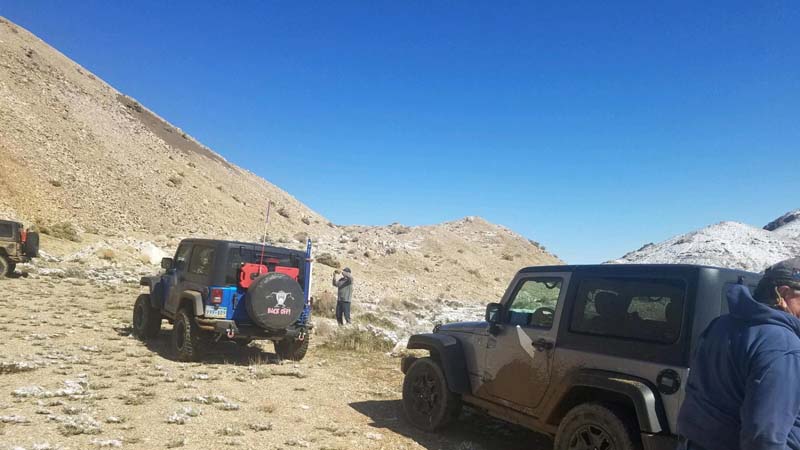 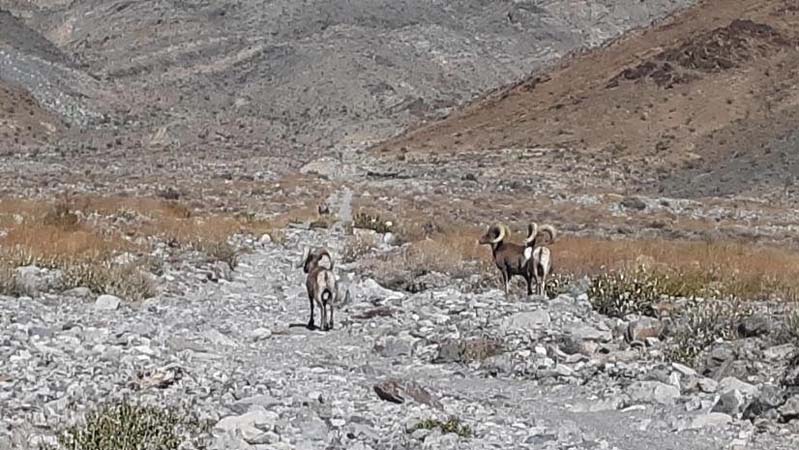 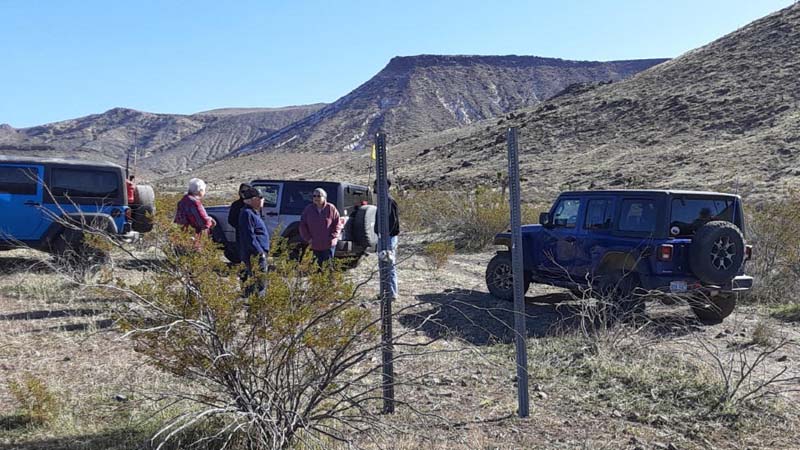 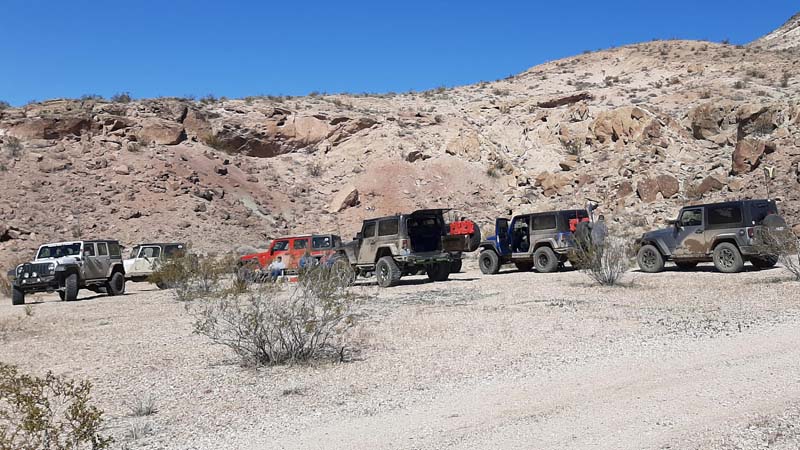 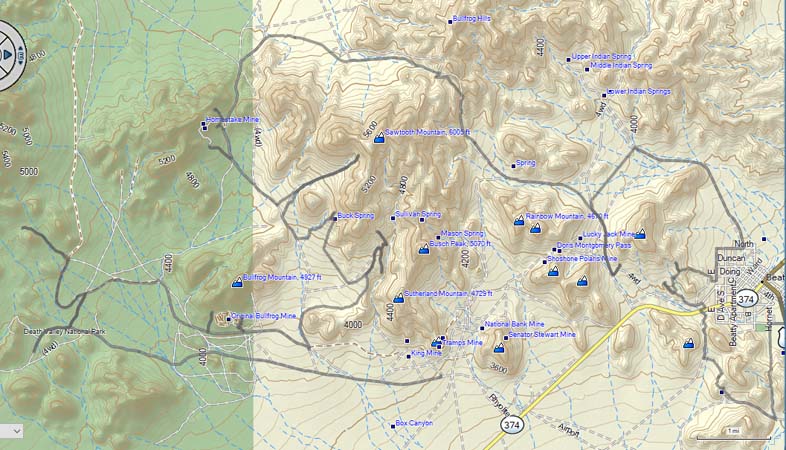 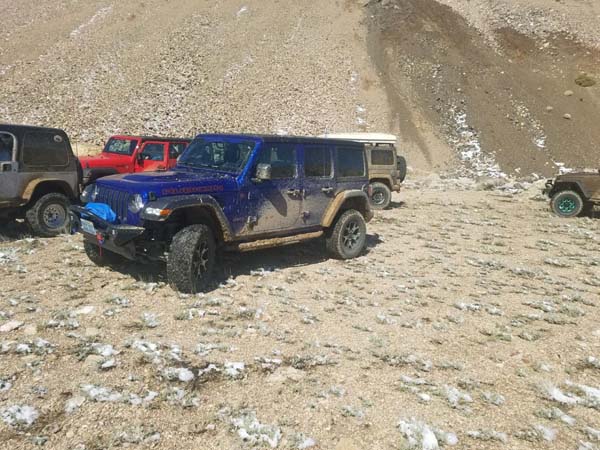 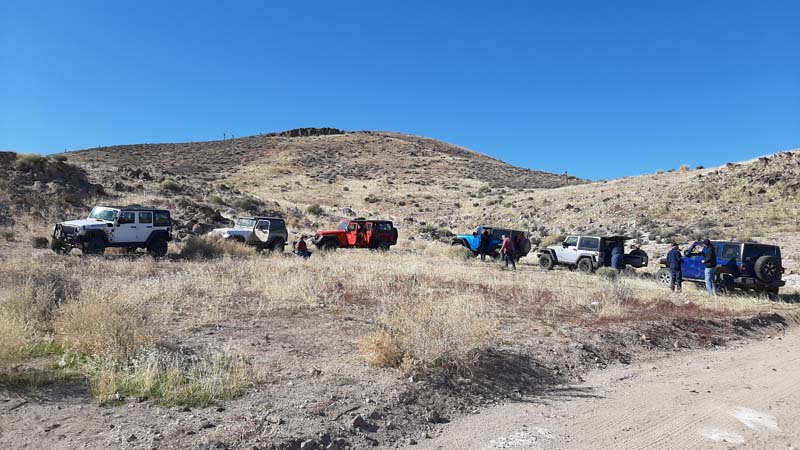 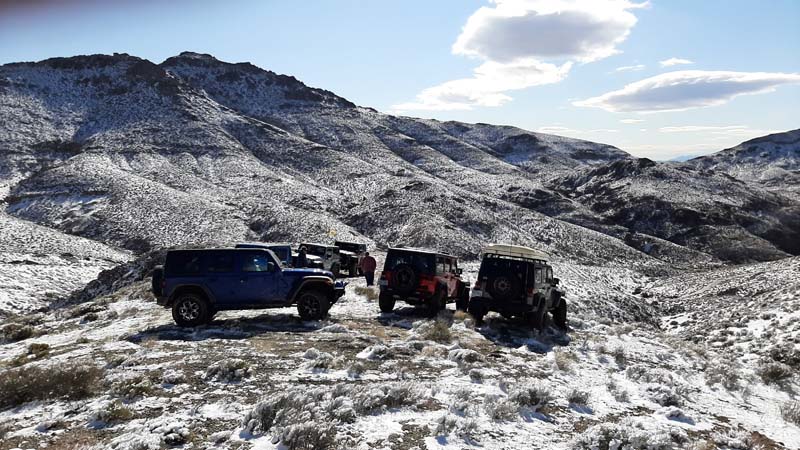 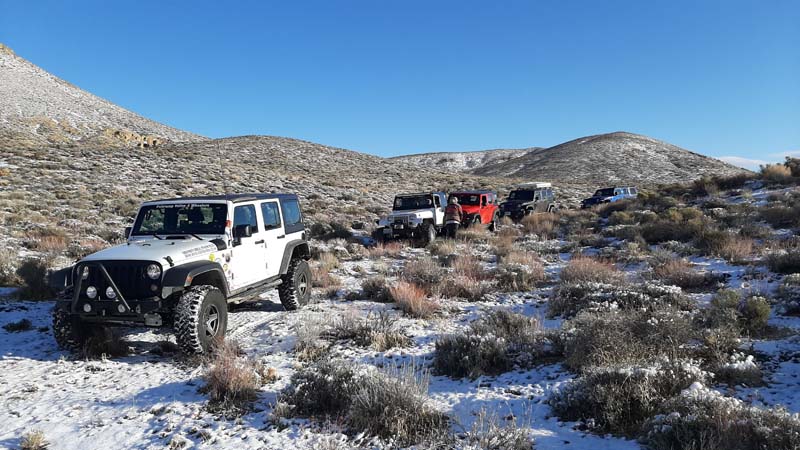 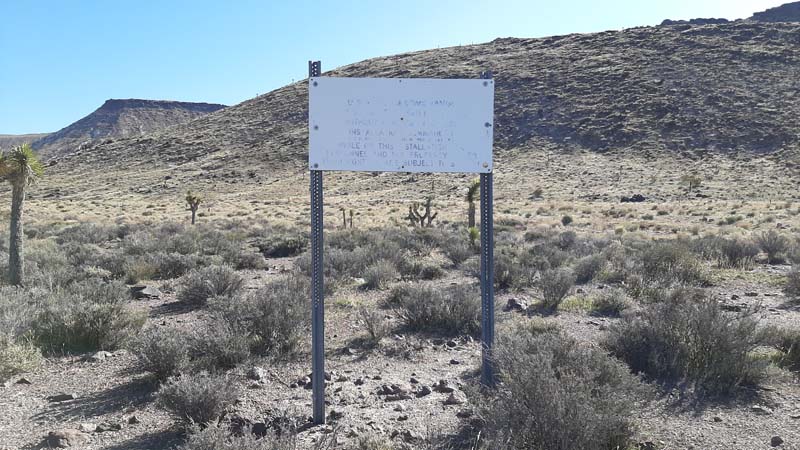 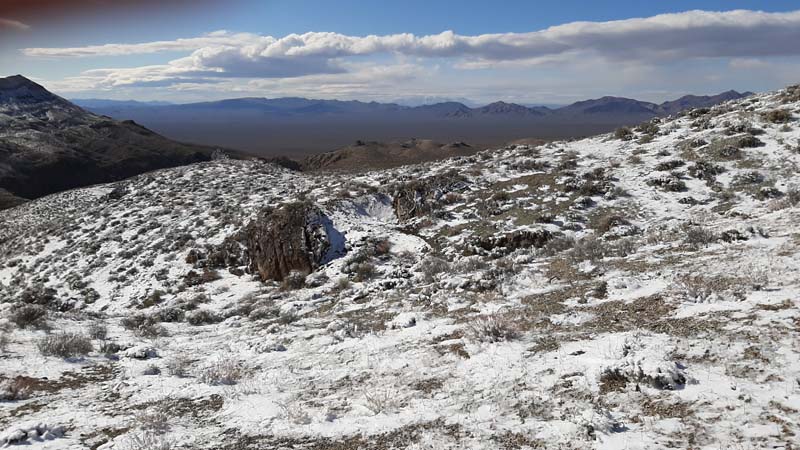 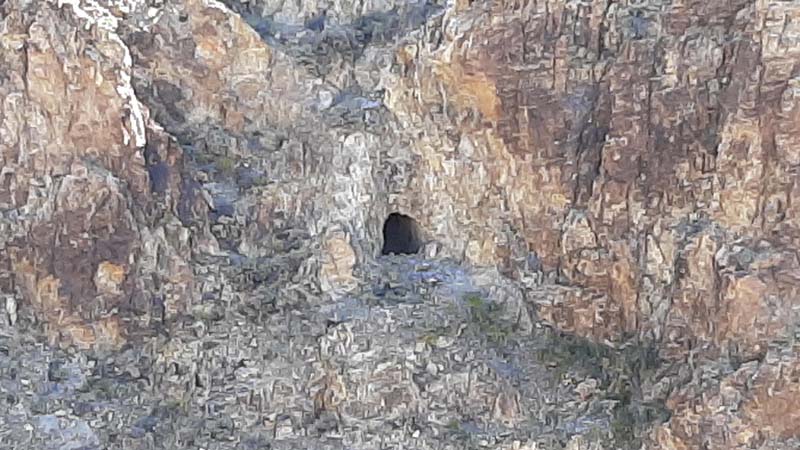 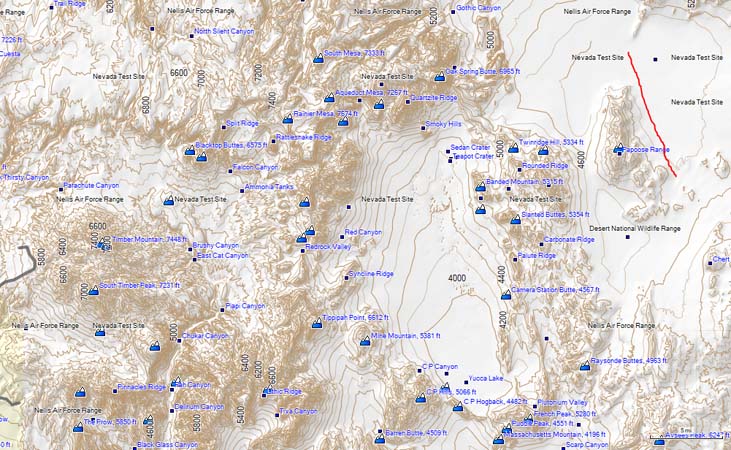 We could not reach the radio towers at the top of Sawtooth Mountain due to snow and ice, but we did find enough trails to explore around the mountain range North of Beatty to fill up a good portion of the day. On the downgrade from one of the passes we traversed, we had a challenging descent in snow. Frozen muddy ruts and eventually melted snow running down through the tire tracks made the section of trail interesting. I was having fun, Sandi’s fingers left permanent indentations in the dashboard. We eventually made it back to town to visit the car wash, have some beers at the Happy Burro and make plans for dinner.

On Tuesday, we met for a 6:00 AM breakfast at Mel’s before starting off on our next exploration. We were 2 Jeep Wranglers down from the previous day as Don & Linda and Ed & Mary Lou had left us, but the group was now more maneuverable and further capable of reversing course in the tight dead end canyons we reconnoitered.

At our first encounter with the Nevada Test Site boundary, there were no Black Helicopters or armed guards to deter us from entering the base, only some vandalized sign posts, faded signs and our common sense. As we proceeded to another boundary access, we ended up chasing a pair of camera shy burros up a narrow canyon. We did not find any signs and apparently our common sense had left us when we crossed the bold red line marking the Test Site boundary on the GPS further North, but as we passed through a gorgeous, dense Joshua Tree forest, we eventually came to a dead end and did not end up in the Stockade, or worse, erased from history. (who?)

Since several of us had issues back home to address, we aired up alongside the Amargosa River North of town at about 1:00. A few others used the remaining portion of the day to further investigate the area. Brian & Jeremy exploring with Vic & Yvonne even took photos some Big Horn Sheep in the old Marble quarry South of town.

I have set aside my Canon digital camera for the time being because dust has invaded the interior and is visible on the photos. My new Samsung Galaxy A50 phone has filled in for the last several trips, but I am not totally thrilled with the inconvenience of using a phone for photos. However, I like the Panorama feature and may continue to utilize it, but the camera will most likely be sent in for cleaning. Also, several other pictures are from guest photographers Sandi and Brian. All in all, considering the ice, snow and mud we encountered, I think we got in some exciting, scenic runs and it appeared as though everyone had a good time.